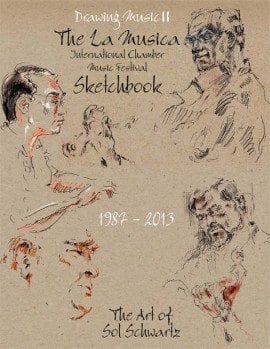 FOR IMMEDIATE RELEASE:
March 18, 2013
Lenox, MA – Studio Two is pleased to announce that their client, nationally recognized illustrator and artist Sol Schwartz, has published his fourth book – the 168 page hardcover, titled: Drawing Music II: The La Musica International Chamber Music Festival Sketchbook. The book encompasses more than 300 of the artist’s drawings over 35 years which include many of the La Musica musicians, collaborators, audience members and venues. Believed by many to be Mr.
Schwartz’s best work to date, the book will be formally presented to La Musica’s Artistic Director, Bruno Giuranna, at a dinner celebrating Giuranna’s 80th birthday on April 10, 2013. The book was designed and produced by Studio Two of Lenox, MA and Miami, FL.

For over three decades, Mr. Schwartz has been drawing musicians, conductors, actors and dancers at many cultural venues in both Sarasota, FL, New York, NY and the Berkshires of Western MA. From many arts organizations he has an open invitation to capture the vibrant and spontaneous spirit of the artists during performance and rehearsal. “It happened by accident,” the artist said. “I used to make little sketches in the corners of my programs when I attended concerts.” Eventually, he began bringing a sketchbook along to work in, and over the years, has completed thousands of studies, including likenesses of such musical, dance, and theater superstars as Andre Previn, Itzak Perlman, Emanuel Ax, Seiji Ozawa, Yo-Yo Ma, Katherine Dunham, Savion Glover, Mark Morris, Tina Packer, as well as La Musica’s Bruno Giuranna, Derek Han, Daniel Avshalomov and Federico Agostini. “The novelty of my work is that I do it while a performance is underway, sometimes in the pitch dark,” Mr. Schwartz notes. He prefers not to adjust or complete an artwork after the fact, and enjoys the sense of immediacy that is conveyed by drawing on site. Working in pencil, ball point pen, and Japanese sumi brush, he tries to convey “the spirit of the production, that ineffable nature of a great performance.”

“For those of us who for many years have watched Sol drawing La Musica, what a flood of memories return!” says La Musica Executive Director Sally Faron, “The vibrancy and joyfulness of his portraits speak to us once again of the same qualities in those musical performances. And we happily look forward to more!”

“It has been a tremendous pleasure working with Sol over the last decade on his four books, exhibitions, and gallery shows,” says Studio Two Creative Director Kevin Sprague, “Sol’s artistry, attention to detail, and creative ideas inspire us to greater work. We’re exceptionally proud of this publication.”

La Musica, now in its third decade, has established itself as an artistic and critical success and an outstanding American cultural institution. Guided by Giuranna and Associate Artistic Director, Derek Han, La Musica fulfills its mission to bring together the finest musicians of Europe and the Americas to present exciting programs of familiar and unusual chamber music, communicating a joy in performance to enthusiastic audiences. La Musica is steered by Executive Director Sally Faron and a dedicated board of directors. 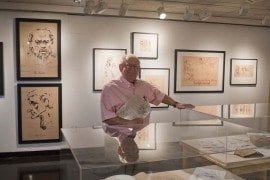 Mr. Schwartz’s sketches and drawings can be viewed and purchased at galleries and museums throughout the Northeast region, as well as online at solschwartz.com. Mr. Schwartz resides in Sarasota, FL, and Lenox, MA. More information about the La Musica Festival may be found online at www.lamusicafestival.org or call (941) 366-8450, ext. 3.

Studio Two provides strategic branding and creative thinking for dynamic organizations. Since 1994 the Studio has been a leading provider of outstanding brand development, strategic thinking, media planning, web design and graphic design. Studio Two has offices in Lenox, MA and Miami, FL. More information may be found at studiotwo.com or by calling Kevin Sprague at 413-447-5433.